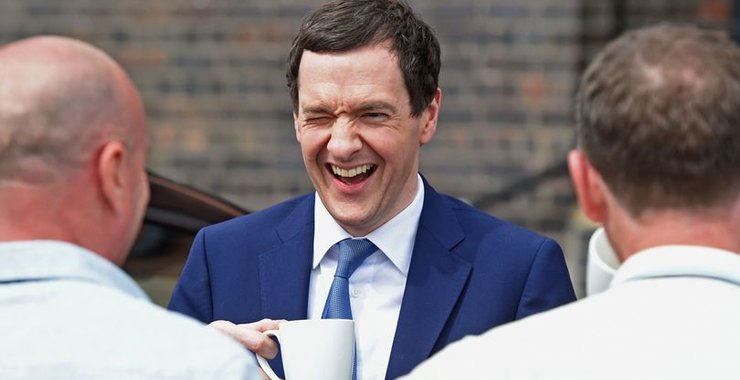 Today, George Osborne could put them right on that. Decades later, he too is making the case for economic and social liberalism: the politics of the centre with a harder edge than is normally associated with that uncertain political territory. He cannot see why centrism should be associated with sogginess. A platform based on the two freedoms ought to appeal to a large number of voters. Less regulation, more aspiration: fewer controls, more liberty - it should be easy to transform all of that into a programme boosted by some catchy slogans. Above all, there is a strong case to be made that far from being antithetical, economic freedom and social generosity are complimentary. Only a free economy can generate the resources required to help the needy. That all sounds simple: not so. There are all sorts of problems along the way, and Mr Osborne has just been sharing a stage with one of them.

George Osborne is a brave man. Taking part in a double act with Tony Blair is the political equivalent of swigging novichok. Mr Blair seems unaware of this, because he has no insight into his own condition. 'After such knowledge, what forgiveness?' Having no self-knowledge, he fails to understand the need for forgiveness and does not realise that he has turned into toxic waste, poisoning any cause that he supports. Although he was a steady hand of the Treasury's tiller, George has always had a gambling, risk-taking streak. So he may enjoy the frisson of appearing with Mr Blair. If he sups in that company, he will need a very long spoon.

That said, there is a paradox. As Mr Osborne implied, if there were a young and charismatic Labour Leader, a new Tony Blair without the toxicity, the Tories would be twenty points behind. Blairism with a non-Blair face could be formidable. Mr Blair often gives the impression that he was invented by Lewis Carroll. If he could only follow the example of the Cheshire cat and disappear, except for the grin, which would be left in other hands, or on other faces - yet there are limits even in Wonderland. So he is stuck with the role of Humpty Dumpty.

Apropos great falls, centrism's problems go  beyond personalities. Like much of the rest of British politics, it runs into the rock of Europe. Just as the referendum is difficult to integrate into a Parliamentary system, the European issue is difficult to integrate into the party system. Most centrists are Remainers whose potential appeal to disillusioned voters is impeded, because many of them have already found an outlet for their disillusion, in Brexit. There is, of course, another group of disillusioned voters: Tory Remainers. They have an obvious difficulty, which works in the Brexiters' favour. A split in the Tory Party could bring Jeremy Corbyn to power. There are some Tory Remoaners - 'By woman wailing for her EU lover'  - who are so desperate that they would actually prefer Corbyn to Brexit. But not many.

The centre faces a further problem. A hundred years ago, there was a great party with an historic name. It too could claim a commitment to economic and social progress. But it was about to be crushed, by an electoral process which virtually imposes a two-party system. Caught between the tribalisms of Left and Right, the Liberals perished.

A hundred years later, they were re-awakened by a fairy prince (fairy very much in the old-fashioned sense). Then the script went awry. The Clegg revival did not turn out to be a restoration of a princess to her rightful throne. It was more of a dead-cat bounce. The Liberals who do survive have a number of handicaps. First, many of their MPs and the majority of their activists are not sophisticated centrists who believe in freedom. They are single-issue fanatics, often full of anger, frequently hostile to freedom. Some of them give the impression that they have indeed been knocking back the novichok. Many of them belong on the Left, but happen to find themselves in parts of the country where no Leftist could win. Although they no longer Clegg up the centre, they will continue to clog it up.

That does not mean that Centrism is defunct, merely that its destiny is now in reluctant hands. The novichok affair has convinced many Labour MPs that their Leader too is toxic waste. 'We cannot go on like this,' they are telling one another: 'We must do something.' So will they? That is not yet clear. But the Centre's short-term destiny depends on their decision.