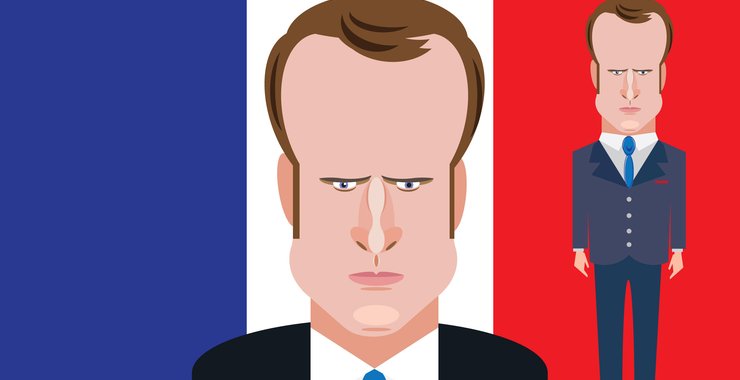 In politics, luck is crucial. In 1794 at the end of the Terror, when fear and paranioa were rampant, Napoleon was fortunate not to be guillotined. After the failure of the Egyptian expedition, he set off back to France in a single warship. Nelson was patrolling Mediterranean waters with a superior force. If Napoleon had run into him, history would have been very different. But the future Emperor's luck did not fail him, until he invaded Russia.

Emmanuel Macron, his disciple, has benefited from two strokes of luck, in both of which a formidable opponent was discredited. Dominique Strauss-Kahn is almost a forgotten figure. But if he had not committed an indiscretion with a chambermaid, he would have become President of France and might well have been re-elected. Francois Holland would have remained in the obscurity which suited him so well. At it was, M Hollande had the chance to prove that France could do even worse than Nicolas Sarkozy. While hapless Hollande floudered and failed, there was an obvious successor: Francois Fillon. Financial scandal supervened. Suddenly, there was no convincing candidate from either the Right or the Left. Could this be Marine le Pen's hour? No, it could not, for which we should be thankful. Things would have to be a great deal worse in France before she became electable. Although the French can be infuriating, they do not deserve that.

Instead, they have a young man in a hurry, who came from nowhere, had no party around him: had nothing, except daring and an opportunity. He took it. Perhaps because of the surprise, he encounted considerable scepticism. Glamorous he might be, but would this survive his first encounter with the French street, that formenter or riots and breaker of reputations? Thus far - and it is ridiculously early to come to a sweeping conclusion - this has not happened.

The new President has a number of related advantages. Now that Angela Merkel has crumbled, he seems to be the strongest political leader in Europe. This has enhanced his standing at home, where a lot of French voters are fed up with failure. In recent years, the dominant public mood has been pessimism, encouraged by lawlessness, terrorism and uncontrolled immigration. There has been a widespread feeling that France was finished. So a large section of the populace is willing the new man to succeed. In response, he has restored glamour to the Presidency. Although there is a certain amount of chin-stroking about the much older wife, President Macron has style, unlike his immediate predecessors. Most of the French public did not object to President Hollande having a mistress. They did object that he arrived for his cinq a sept looking like a pizza delivery boy. In England, the press would be demanding to know how much everything was costing and who was paying. The French do not appear to mind when M Macron uses Versailles. because he knows how to behave like a President.

As well as the perquisites, he also knows how to mobilise the power of the Presidency. He is determined to transform France's sclerotic economy. So far, there has been surprisingly little resistance. That must surely change. Welfarism, state power, mercantilism and a sub-Marxist suspicion of freemarkets are in the blood stream of France's public ethos. But it would be foolish to assume that M. Macron is bound to lose. There may be a parallel between the  pessimistic atmosphere in the France of the 2010s and similar sentiments in England at the beginning of the Thatcher era. Back then, because a lot of our people thought that the country was finished, it was possible for Margaret Thatcher to convince them that she was the last and only hope (which she was). M Macron may achieve something similar.

Whether and to what extent he succeeds, no-one will ever be able to accuse him of lacking ambition. His reform progamme and his enthusiasm for European political union have created a vast agenda, more than enough for a two-term Presidency. That might be good news for the UK.

Given the complexities he already faces, it is obviously in President Macron's interests to deal with Brexit as rapidly as possible. On the face of it, that might not seem to be impossible. Free trade is in everyone's advantage, as M Macron recognises. Here at last is a French leader who owes more to Adam Smith than to Colbert. A successful banker, the President also understands the importance of the City of London and does not seem to resent it. Another 'at last': a French leader who does not resent the British. He is aware of the importance of security cooperation. Finally, if he is truly serious about political union, he must understand the necessity for a division, between the founding six - Benelux, Italy, Germany, France - and the rest. It will be mightily difficult to unite the six. The 27: that would be a fantasy. The evidence is that M Macron is not into fantasies. If Europe did evolve into an inner core and an outer free trade and cooperation zone, the Uk could still end up as captain of the second eleven.

So might there be an open road to a deal? Yes, but only if two enormous problems can be overcome: free movement of people and the jurisdiction of the European Court of Justice (ECJ). Most sensible Brexiters recognise the important of EU immigrants, who make a vital contribution to the economy. But people voted Brexit because they want to pick and choose: to welcome the large numbers of EU nationals whom we want and need, but to exclude those who would make no contribution except to welfare costs and crime statistics,

As for the ECJ, there has to be a trade court, arbitrating when there are disputes. But the Brexiteers voted for British independence. That cannot be realised as long as we are the subjects of a European Court, hungry for jurisdiction, constantly seeking to expand its role: constantly pressing for the enlargement of European sovereignty.

Many other issues would cause difficulties, which cannot possibly be resolved over the next few months, but which could be open to solutions, gicen time and good will. But on the two big questions, compromise would be mightily hard. Here again, luck and personalities matter. Mrs May has also been a lucky politician. She only became Prime Minister because better qualified candidates imploded. Whether the country was equally lucky is another matter. That said, to be fair to her, she seemed sure-footed in her dealings with the French President. But it would help if there a competent Brexit Secretary in place of David Davis - and a Foreign Secretary who was worthy of the job. Along the bottom of the Bayeaux Tapestry, to provide light relief rather in the manner of Shakespeare's clowns, are scenes of wenching and gambolling. Boris belongs down there. The PM must surely recognise that his retention in post demeans a great office, weakens the government, undermines the Brexit process and insults this country. So why does she persevere with failure?