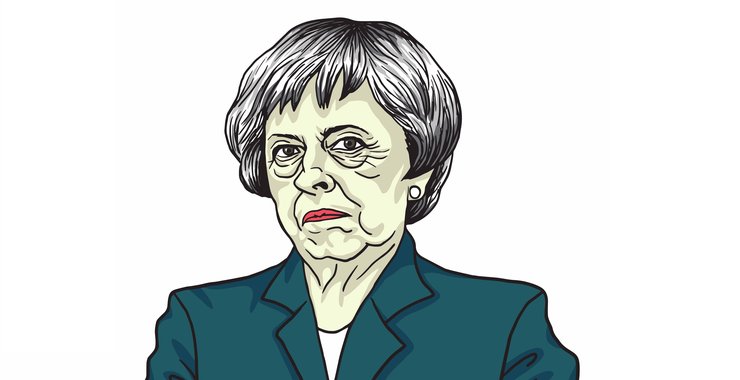 Theresa May is to be congratulated. She has performed a feat which most political observers would have regarded as impossible. After Priti Patel's departure, she has ended up with a weaker Cabinet. Miss Patel has no political judgment and a mediocre intelligence. She could not run a department of state. All in all, she reminds one of the old adage: 'empty vessels make the most noise.' Noisiness is linked to ambition. She actually believes that she could become the Leader of her party.

Rest assured, gentle readers. The condition of the Tory is bad: very bad. It is not that desperate.

Priti Patel's departure gave the PM an opportunity. There are at least ten highly able junior ministers or back-benchers more than ready for promotion. Instead, we have - Penny Mordaunt. Already a Minister of State, Miss Mordaunt has already been grotesquely over-promoted. She is simply not bright enough to be a Cabinet Minister. She too will prove incapable of running a department. Moreover, she is charmless.

She has one quality: energy. She worked very hard to win her marginal seat. But this is surely evidence in favour of the famous military teaching. Divide soldiers into four groups around the theme of clever/stupid, industrious/lazy. The clever and industrious will make good staff officers. The clever and lazy are suited to the highest commands. The stupid and lazy will do well in the ranks - once the NCOs have pounded out the laziness. But the stupid and industrious are dangerous. The risk is that their diligence will enable them to rise well beyond their abilities and disaster will ensue.

That leads on to an obvious conclusion. It is inevitable that this PM should be blind to the danger of promoting the talentless. How could it be otherwise, given her own level of talent?

A few days ago, she seemed safe, faute de mieux: more faute than mieux, but still safe. This was even more true after Michael Fallon's degringolade. One day, a promising prospect for the political Derby; next day, the horse is off to the dog-food factory. Arguing for Mrs May to stay in post, one Minister said that she should be used as a skip for the political toxic waste produced by Brexit. After the negotiations were concluded, procure a new skip. But that rests on an increasingly dubious assumption. It could only work if the PM were capable of running a competent administration. Her: competent? What a ludicrous suggestion.

Without a seriously competent PM, what hope is there for the Brexit negotiations - especially as David Davis seems to have given up trying to grasp detail? It is also crucial that there should be progress on housing, education and other public services. We cannot expect the voters to put up with police officers who are too busy painting their toenails to catch thieves. It still seems inconceivable that Jeremy Corbyn could win an election. But every week which the the Tory party spends in the grip of confusion, back-biting, disunity, chaos and despair is another step in the direction of the abyss.

In response, there is a growing mood of anger. Patriotic Tories know that their country needs them. They also know that it would take little to revive the Party's performance. There are fresh levies ready to race into action with new ideas, all based on aspiration: that bedrock of modern Toryism. Theresa May, new ideas? What a joke. Theresa May, aspiration? Her sole aspiration is survival. She is not a skip for toxic waste. She is a toxic nozzle, ensuring that the clean water of Tory potential only reaches the public once it has been thoroughly tainted. She has failed; she is failing; as long as she is in Downing Street, she will go on failing, dragging down party and country with her.

There are reports that her self-confidence has imploded (if so, that would suggest some self-knowledge). It might be a kindness to steer her in the direction of the exit. So: who should replace her? In one respect, we can relax. Boris is no longer a realistic candidate. Although his survival in office is a disgrace, there is one consolation. All but the dimmest of his colleagues have now seen through him. There is an argument  for  a bit of mak-siccaring, in the political language of early Fourteenth Century Scotland: a Rasputin dosage of poisoned cake, silver bullet, icy Neva et al. But Boris is now a Ministerial collapsed souffle. Even he cannot recover from that.

David Davis is more of a threat and he is as ambitious as ever Fortunately, his performance in office has encouraged his colleagues towards a more realistic appraisal of his qualities. Apropos of qualities, there are the youngsters who will inevitably suffer from lack of Cabinet experience. Some of them might be tempted to try anyway: George Freeman, Jesse Norman, Rory Stewart, Tom Tugendhat are all ambitious, and justifiably so. From the Cabinet itself, Amber Rudd is a serious figure - and so is Boris's nemesis, Michael Gove.

It is strange to remember that back in 2016, Boris received a massive amount of sympathy, whereas Michael Gove was portrayed as a blend of Machiavelli and Iago. He had slain the Old English Sheep-dog. Since then, however, the lab reports have accumulated. That sheep-dog was full of rabies. Mr Gove was not a wanton murderer. He was a conscientious vet.

This debate will not be resolved easily or quickly. But one judgment is increasingly irrefutable. She is useless and there is no point in pretending that this could change. So she should perform one last service for party and country. It is the only service she has still left in her: to start organising her departure.