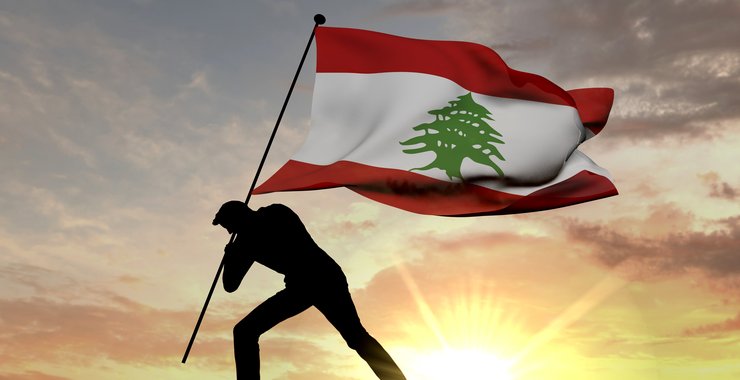 Within hours of that meeting, Hariri was back in Riyadh, where he has a home. His mobile phone was confiscated immediately. He was then obliged to read out his resignation statement in front of the Lebanese flag on Saudi al-Arabiya TV, blaming Iran for 'sowing sedition, devastation and destruction in any place it settles'.

The militant organisation Hizbollah, he said, was not only dictating Lebanon's domestic politics, but was active in Syria and Yemen. Melodramatically, Hariri claimed he had fled for his life to avoid the fate of his father Rafik, who was blown to bits by a car bomb in Beirut in February 2005. Blame for this has been attributed to both Hizbollah and Syria though no one knows for sure. The Lebanese authorities have said that they had no intelligence of such a plot against Hariri junior. Hariri's Saudi hosts/captors added the detail that the missile fired from Yemen at King Khaled international airport in Riyadh at the weekend was of Iranian provenance, and that Hizbollah had helped fire it. It was intercepted by a US supplied defensive system.

With the Saudis saying that this was tantamount to an act of war by Hizbollah, Hizbollah's spiritual leader Sheikh Hassan Nasrullah was quick to say that Hariri's resignation speech was written by the Saudis, while calling for 'calm and patience'. While Hizbollah are not known for backing down from any fight, they do not want a civil war to re-erupt in Lebanon.

What is going on here?

Lebanon is a small country of 4 million people, plus 1.5 million refugees from the conflict in Syria. Following a fifteen years civil war, Lebanese politics are based on building consensus and sectarian power-sharing. Breakdowns are frequent and elections are sometimes postponed, but it sort of works. The next election is scheduled for next year. Hariri became prime minister in 2016. He claims to represent Lebanon's Sunni minority. The cabinet includes two representatives of Hizbollah out of 30 ministers (they occupy the industry and sports and youth portfolios), which represents Lebanon's Shia population, particularly in south Beirut and the Bekaa Valley. It was established by Iran’s Revolutionary Guard or IRGC in 1982 to resist the Israeli invasion. It has become a well-armed and battle-hardened force in the interim, with 4,000 fighters deployed in Syria where they have honed their inter-operability with the Iranians and Russians as well as with Assad’s army. It has also ramified a huge social and welfare network which has more capacity than the Lebanese state. While the US claims that Hizbollah is a terrorist organisation (often without supporting evidence), the EU distinguishes between its armed and welfare/political wings.

After a long period of delay, earlier this year, the Maronite Christian Michel Aoun, a former general, was elected President. He is an ally of Hizbollah who has also changed his mind about Syria’s Bashar al-Assad as a ‘least bad thing’. Hariri’s party supported Aoun’s election. Contrary to western imaginings, Hizbollah is not a 'client' of Iran, for Nasrullah is a very independent figure who combines spiritual authority with political clout, and as the war with Israel in 2006, and Hizbollah's performance in Syria since 2011 both show, Hizbollah is a highly capable military actor in its own right. Knowing that, the US has poured an impressive amount of arms ($1.4 billion since 2005 and $160 million this year) into the Lebanese National Army as a domestic counterweight to Hizbollah before the latter displaces it entirely.

MbS’s motives are not hard to divine. Effectively stalemated in his reckless two and half year war in Yemen, where he and his UAE allies have caused a humanitarian catastrophe, and defeated by Iran, Hizbollah and Russia in Syria, the Saudis have decided to turn the heat up in Lebanon, as a new front in their regional confrontation with Iran. The isolation of Qatar has not gone well either. All MbS has achieved there is to make the ruling al-Thani more popular, while dividing the Gulf Cooperation Council itself. Only Bahrain and the UAE are on Riyadh’s side.

In order to compensate for these foreign policy disasters, MbS has now launched a Chinese and Russian style anti-corruption campaign in Saudi Arabia itself. As in those two exemplars, it is also a political purge of any potential opponents among the princes and the mega-rich. It follows earlier arrests in September of 70 academics, intellectuals and dissident Islamists under new security laws. Some of them had merely criticised the conflict with Qatar, in line with UAE calls for a blacklist of anyone who opposed the sanctions. The arrested include seven judges on the Specialised Criminal Court which handles terrorism cases. They were detained because they were close to former Interior Minister Crown Prince Mohammed bin Nayaf, the older cousin MbS barged aside with his father’s and Trump’s blessing. Others were arrested because of their salience on social media, which Israeli tech experts are monitoring on behalf of the MbS regime. None of the arrested men has so far faced any kind of trial.

While the naïve or venal western press is busy boosting MbS as a modernising reformer, notably because he wants women to drive, it is ignoring the gathering autocracy, for the reforms do not include the rule of law or representative institutions. On the contrary, MbS is eradicating even the limited tribal checks and balances of the past.

Thanks to the influence of the Kingdom’s enormous lobbying and PR operations, the world press has also swallowed MbS’s guff about a new $500 billion high tech city called NEOM on the Gulf of Aqaba. As a businessman friend who attended the recent Riyadh investment conference sourly remarked, this consists of slick PR videos of women in bikinis and robots. Moreover, investors like him were in Riyadh to harvest funds, not to put their money in a Kingdom one step away from war and domestic crisis. My friend has since noted that the Ritz-Carlton ball room in which he and hundreds of others sat, is now an ad hoc detention centre for some of the richest men in Saudi Arabia who are coiled up under blankets on mattresses. If they are so vulnerable, what would be the fate of foreigners?

Which brings us back to Lebanon. The Saudis have always relied on their chequebooks as a diplomatic tool. They tried and failed to stop Aoun's election by angrily cancelling the €3 billion they had offered to enable the Lebanese National Army to buy French weapons. Now they are likely to pile economic pressure on Lebanon, summoning their own nationals home, while making threats against the 300-400,000 Lebanese expats working in the Gulf region. There, however, they would have a problem, since the French President and the Americans have obviously told them to back off from Lebanon where almost no one wants another bout of civil war. Israel is another matter.

The Saudis would clearly love it if Israel decided this was the moment to have another crack at Hizbollah before it can recover from its costly exertions in Syria, where it is winding down operations. Hizbollah have recently liquidated the ISIS presence in Lebanon itself where the terror group took over border villages.  But the Israelis suspect that Hizbollah is helping the Iranian Revolutionary Guard establish a chain of forward bases in Syria, as part of a land link between Iran and the Mediterranean. Hawks around Netanyahu say that these bases are a red line, though they have to be careful in Syria, given that it abounds with Russian anti-aircraft missile batteries and combat fighters. A strike into Lebanon is another matter.

In the meantime, the war of words rumbles on. As for Hariri, the Saudis have yet to decide whether he is still a serviceable tool for the advancement of their interests, which involve denouncing Iran and unifying Lebanese Sunnis for next year’s election. They may shift their support to his brother Bahaa who is deemed more reliable.

Being held hostage in Riyadh while you read out the Saudis resignation statement only to be usurped by your brother is not an image-enhancing development. Many Sunni Lebanese baulk at the idea of a leading politician having to go to Riyadh to profess oaths of allegiance to a foreign power. It is a democracy after all. Ironically, Saudi meddling has united Lebanese of all confessions and persuasions for as they say they are not a herd of sheep and MbS is not their shepherd. They would like to get on with their lives free of these proxy wars. The Druze leader Walid Jumblatt caught the mood when he said they should be focused on exploiting Lebanon's offshore oil and gas, as Israel is successfully doing.

Hariri says he is 'free' and would like to return home to run in Lebanon's charity marathon as he usually does. Under pressure from the US State Department, which does not want a war in Lebanon, Saudi Arabia now says it would settle for a formal commitment from Hizbollah not to engage in expeditionary adventures in the region. That assurance will not be forthcoming. Admittedly, the Iranian government is distracted by a major earthquake. Even so, it can sit back and watch MbS blunder around the region, perhaps confident too that so many rapid domestic reforms (real and illusory) will eventually provoke a domestic counter-reaction among his multiplying ranks of enemies.

As for other outsiders, it is interesting that whereas President Macron flew in to Riyadh, after opening the new Louvre in the UAE, to remind the Saudis that Lebanon is an independent state, and that France has interests in Iran (Peugeot and Total among them), not a peep has been heard from King Charles Street, As usual it has placed all its chips on the Gulf Arabs, in line with the TWOFOR supermarket principle of ‘buy our arms and get our foreign policy for free’. Besides, our Foreign Secretary is mainly occupied lurching from one self-generated crisis to another, while plotting with his backstabber pal Gove to replace the British rather than the Lebanese Prime Minister.